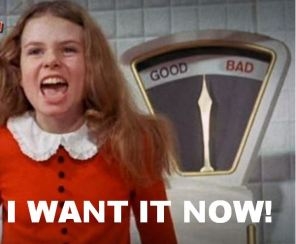 Australia is taking carpark rage to an entire new level. The fight is over space in Australian society and how many white people get to park in that space. This has become a tirade of sobbing and wailing and crying by some really loud white people with loads of money, privilege and power. Not happy with all of this, they want more and they want it now! If they don’t get everything they want, just like Veruca Salt in Willy Wonka they are going to scream!

I want the world, I want the whole world.
And if I don’t get the things I am after, I’m going to scream!

Peter Dutton is terrified that he might lose a bit of white space in society, so he wants to shut that down right now. He wants it to stop now! So just like Veruca Salt, he had a bit of a scream the other day. His scream was demanding that white Australians should think that Lebanese people (or people we might think are Lebanese because plenty of Australians won’t know the difference!) are terrorists, because he does.

As a rich white man with privilege and power, Dutton insists we should all get on board his train and take a journey through the “tunnel of stigmatisation.”

Just like Willy Wonka’s train ride through the ‘tunnel of hell’ This train ride Dutton wants you on, is meant to scare the bejesus out of you, and it will end up taking you to the room where you will be encouraged to participated in a ‘bad deed.’ Take the ‘everlasting Gobstopper.’ More on that later.

Because when you are scared, you will vote for the protectors and that is what all of this is about and the very reason Hanson oozes it and Turnbull defends it.

The advice I have is that out of the last 33 people who have been charged with terrorist-related offences in this country, 22 of those people are from second and third generation Lebanese-Muslim background.

He has been around a long time. He knows the power of words in politics. He is well aware of today’s new trend of Hansonism and Trumpism. He knows his statement was about creating fear and looking to those who announce the fear as ‘protectors.’

This is not the first time Dutton has spewed forth such hateful divisive rhetoric, nor will it be his last. He needs to be sent to the back bench immediately and scorned by all of his party, particularly the Prime Minister. But hey, obviously just a dream, because that is not what happened…..

Peter is such a good little white boy, says Malcolm

Then we had the Prime Minister having a bit of a scream in Dutton’s defence. Taking Dutton’s broad brush Turnbull painted the big white space in Australia with a second gloss coat. He endorsed Dutton by not condemning his words but by praising Dutton as a good human being, committed and compassionate.

Heads up Turnbull, it is not compassionate to paint an entire race of people with the ‘Be scared of them’ brush. If you call that leadership, your idea of leadership is crap, mate.

“Peter Dutton is a thoughtful and committed and compassionate Immigration Minister,”

Pauline Hanson, the Jimmy Swaggart of the Nationalist set in Australia, screamed once again like the wailing fish-wife that she is in the true sense of the word. This time it was about ‘her tolerance.’

If Hanson has to complain about ‘enacting the labour’ of tolerating people who speak up against racism, who defend those humiliated, stigmatised and shunned because of her own words, she should not have a seat in the Senate. That in itself is an insult to our democracy, regardless of how she got there.

For over twenty years she has been screaming at white Australia about how hard done by they are.  First it was the Aboriginals getting more than white people, then it was the Asians who were taking us over and now it is Muslim people who are ‘swamping us’. Her most sickening and lowest scream is her tantrum about how women victims of domestic violence make it all up. Men are the real victims of domestic violence, according to Hanson. An insult to women who have survived and an insult to the women who have died. Yet she claims she is so tolerant she is sick of her own tolerance. I think it is fair to say that Pauline Hanson does not understand the meaning of the word “Tolerance.”

She appears to tolerate and accept worker deaths though. Why is that?

Not so tolerant about worker deaths.

If Hanson wants to scream about men being the major victim of something, she should be screaming about worker deaths. I don’t hear her screaming that her support for the ABCC will see even more workers dying on the job-site.  Apparently that must not be a vote grabber. Apprently you can’t deflect blame onto brown people for that one.

In an alternate universe: If only the boss men on construction sites were people of colour and white men were dying due to the unsafe work practices enforced by people of colour.

If only this was the scenario would we see the truth about Hanson. Would Hanson still support the ABCC which will see workers jailed and fined for stopping work due to a death on site? A very serious question to ask. My bet would be NO, she would not. She would stand there pointing fingers and screaming at the people of colour who would be to blame for the deaths of white men and she would be condemning the ABCC with every screach and squawk she could muster.

There are however vote grabs in those who believe the lies and baseless accusations against Unions, so she is supporting the ABCC. Hanson is an opportunist until her last breath, who is playing with the lives of hard working men and women. Very Un-Australian. Very sickening.

463 construction workers have been killed at work in Australia during our county's 'war on terror.' #auspol

So we hear so much about freedom of speech and how tolerant people need to be of Hanson’s divisive rhetoric. I would like to discuss how regressive this stance actually is.

Repressive tolerance argues freedom of speech as underpinned by the constructs of (small l) liberalism exists to share ideas and have those ideas respected unless those ideas cause harm. Marcuse (1960’s) believed that the tolerance of ideas that were harmful to society encouraged a repressive society rather than enable a progressive one.

Discriminate tolerance is framing and setting aside the ideas that should not be tolerated in a debate towards progress. We already do this as a society. We do not have complete indiscriminate tolerance, as those ideas will harm society. Our national security legislation is one example.  Another example is Section 18c of the Racial Discrimination Act which makes hate speech unlawful.

Those who sit on the right wing and the extreme right, the Conservative-Liberals and the Hansonites argue for complete indiscriminate tolerance. They argue that unless they can be completely indiscriminate, this impedes their freedom of speech, even if that speech is harmful. How is that good for society?

A thirteen year old boy committed suicide a few days ago, because bullies used ‘freedom of speech’ towards him being gay. Harmful words can and do cause death. This should be marked as a national tragedy.

I ask you again. How is absolute freedom of speech good for society?

Marcuse’s argument is that unless this is done, we are tolerating for the sake of being tolerant and impeding progress.

So what of Truth?

In a democratic society, democracy is not pure. Debate exists within an unequal framework. The institutions of Government and the media as two examples, have privilege and power to define what is ‘normal’ for the majority and what is not.  These entities have the power to stigmatise groups of people and spoil normal identity (see Erving Goffman). They have the power to place minority groups in the place of ‘weird and unacceptable.’ A forte of Hanson, Trump, Dutton and Christensen and the media in Australia (with the exception of Andrew P Street, that guy rocks!)

This imbalance of power in our democratic society frames truth in a frame that there is only one rational and objective truth. There is not just ‘one truth.’ There are multiple truths and multiple realities.

The truths of minority groups should be considered and heard. Not just the truth of Hanson, Dutton and Christensen, Reclaim Australia and other Nationalist groups and individuals who have internal racist unconcious bias, yet see people who call this out as ‘smug’ and ‘wrong’.

The right to freedom of speech is about the white wealthy privilege of keeping minority groups excluded. It is not about equality, or inclusion. If Hanson thinks her rhetoric is about ‘equality’ and that she is the superior being who will bring equality to Australians, Hanson has a serious case of Dunning-Kruger effect. (Shout out to “MH” you know who you are).

To return back to the theme of Willy Wonker let me put the current rise of nationalism and racism into perspective. Charlie gave back the Everlasting Gobstopper because he had a bloody moral compass! He did not want to participate in a bad deed. If Charlie was in this debate, he would not want to participate in divisiveness and hateful rhetoric towards groups which cause stigma and even death.

So shines a good deed in a weary world.

I love to discuss Australian Politics. My key areas of interest are Welfare, Disadvantage, emotions in the workplace, organisational behaviour, stigma, leadership, women, unionism. I am pro-worker and anti-conservativism/Liberalism. You will find my blog posts written from a Laborist / Progressive Slant.
View all posts by trishcorry »
« Steve Price & Others Blaming “The Left”
A Casual Conversation about Politics in Regional QLD »

15 thoughts on “Dutton, Turnbull, Hanson and Veruca Salt – How Tolerant?”