Turnbull: From Diamond to Deviant. Oh! How He Has Fallen 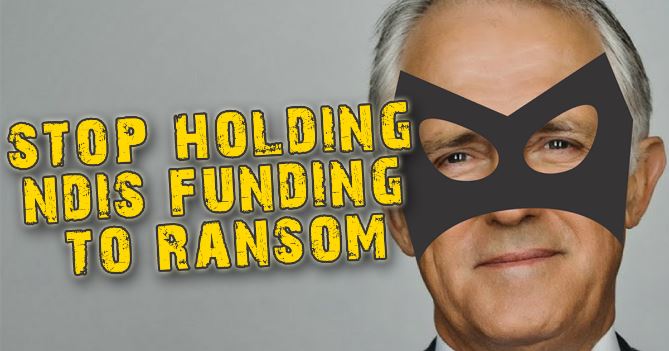 I felt sick today. Truly sick. Malcolm Turnbull dangled people with disabilities as political pawns. He used vulnerable people as pawns to pressure Labor to support harsh cuts to welfare or he would hold off on the NDIS. Turnbull has now slid all the way from Diamond to Deviant. There is absolutely no coming back from this.

Tawdry Deals Between the Sheets

Before Turnbull had to whisper tawdry deals to Pauline Hanson between the sheets; he was so proud of the NDIS.  When he thought he was invincible in September, 2015 he said this about signing agreements for the NDIS.

This marks a huge milestone towards the delivery of one of the largest social policy reforms in our nation’s history.

All Hail Turnbull – A Diamond

In 2015, he was considered a diamond. Precious and rare. A Prime Minister who would never lose his sparkle. In that point in time, in all his verbose puffery, he wailed glorious over the benefits of the NDIS.

I am proud our Governments are securing a sustainable NDIS that will be available to all who need it and I want to thank all of those who have worked so hard to get us here.

All Hail Turnbull – A Deviant

Today, just 17 months later Turnbull dismissed the NDIS as a burdensome cost to the taxpayer. A shameful political defence that reduced some of our most vulnerable people, who need our support, love and pro-community solidarity, into nothing more than a stigmatising liability on the taxpayer.

He then drew the “Hanson card” and pitted the oppressed against the oppressed. A tactic normally reserved to pit the homeless against the refugees; he used this card to pit jobless youth living under the poverty line against people with a disability

In a dehumanising fashion that literally made my skin crawl and my stomach flop; he did something so abhorrently repulsive, I could not believe my ears.

What Was He Thinking

I know I have already expressed I was shocked. I still am, hours later. Listening to this today, I was appalled. I couldn’t imagine what sort of person I would have to become to do this.  How would I feel? What would I be thinking about? How could I look a person with a disability in the face again?

I really want to know what was going through his head.  What was he feeling. Not that he would reply but I just had to tweet him this.  If a journalist can ask him face to face that would be great.

Hey @TurnbullMalcolm what emotion do you feel when you use people with a disability as political pawns? Glee or self loathing? #auspol

Turnbull threatened to withhold assistance for people with a disability they have been waiting years for, unless Labor signed off on harsh reductions in welfare. This includes a reduction in payment for Newstart and withholding payment from new recipients for four weeks. Over 25% of people on Newstart also have a disability.

The choice Turnbull gave Labor is sickening and can be summed up as:

Sign up to push unemployed young people into more poverty and homelessness or the disabled kid gets it.

How Far He Has Fallen

The Prime Minister is showing an obvious contempt for people with a disability. The tirade towards Bill Shorten calling Shorten a parasite; clearly shows this was a case of psychological projection where Turnbull was bellowing out his deepest feelings about himself. Today he was on display as a parasitic, loathsome creature.

I would not normally be so harsh; but his behaviour today was nothing short of contemptible. I have no other words. I’m sorry.

In 2017, the transition from diamond to deviant is complete. Turnbull now holds views that are incompatible with civil society. Oh! How he has fallen!

Turnbull Holds the NDIS Hostage. Please sign the petition below. 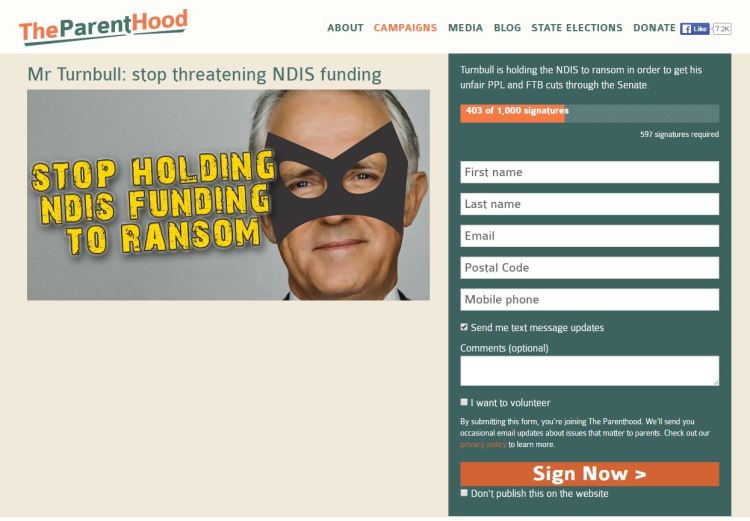 I love to discuss Australian Politics. My key areas of interest are Welfare, Disadvantage, emotions in the workplace, organisational behaviour, stigma, leadership, women, unionism. I am pro-worker and anti-conservativism/Liberalism. You will find my blog posts written from a Laborist / Progressive Slant.
View all posts by trishcorry »
« Stuff the Silent Majority. It is Your Time to Be Heard
Michelle Landry Must Resign and Force A By-Election in Capricornia »

One thought on “Turnbull: From Diamond to Deviant. Oh! How He Has Fallen”